When you think of geothermal energy, Iceland immediately comes to mind. Situated on a segment of mid-ocean ridge fortuitously intersected by a mantle plume, the heat flow is very high, and geothermal resources are abundant. Compared to other countries, Iceland doesn’t produce the most megawatts of geothermal power – that distinction belongs to the US. However, in terms of percentage of national power generation, Iceland ranks the highest, with ~27% of their electricity coming from geothermal power plants, and the rest from hydro. Geologically, Iceland is quite different from western Canada, perhaps even polar opposite, the former being at a divergent plate boundary, and the latter at a convergent boundary. Nevertheless, there are plenty of parallels that can be drawn between the two, and lots to be learned from the experts there.

My visit was hosted by the Iceland GeoSurvey (aka. ISOR: Islenkar Orkurannsoknir = Icelandic Energy Research), a state-owned institution that receives its funding only through project contracts with various companies and organizations. Their focus is on geothermal energy exploration, but they consult on other geoscience topics as well. Headquartered in Reykjavik, they have a small branch in the northern town of Akureyri, which is where I spent most of my time. 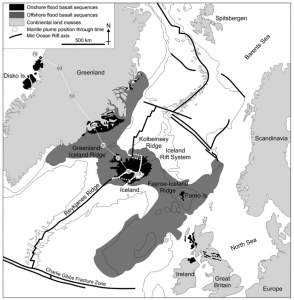 Image: Tectonic setting of Iceland in the northern Atlantic. Note how the Iceland Rift System steps out east from the trend of the submarine Reykjanes and Kolbeinsey Ridges. Circled numbers indicate the location of the mantle plume over the past 70 million years. Source: Thordarson and Larsen (2006).

The high temperature resources occur in the volcanically active regions in the immediate vicinity of the active rift zone that zig-zags from north to south across the island. These are the geothermal resources that Iceland is famous for, with big power plants situated in dramatic volcanic landscapes. The heat for these systems comes from still-molten magma chambers that occur along the spreading center. Groundwater percolates down along the active normal faults and gets heated up in proximity to these magma bodies, becoming partially if not totally vapourized. Boreholes are drilled to depths of ~1-3 kilometres to bring this steam to the surface. Unlike the binary fluid Organic Rankine Cycle engines used in low and medium temperature resources elsewhere in the world (see previous blog post about Alaska), this steam can be used directly to turn turbines and generate electricity, rather than requiring a second fluid to flash to vapour. In some cases, in addition to generating electricity, the heat from the steam is used to heat fresh groundwater, which is then piped into Reykjavik and other towns to provide direct heating for homes and businesses. The fresh groundwater is used for this purpose because it causes less scaling and corrosion issues than the hydrothermal fluid. 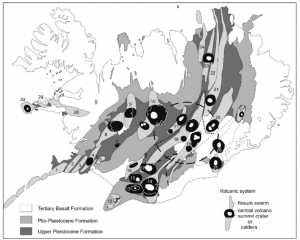 A number of volcanic centers occur along the spreading center, and geothermal power plants are situated near these volcanoes. Near the Keflavik International Airport, are the Svartsengi (76MW) and Reykjanes (100MW) power plants. The waste water from Svartsengi is piped into the pool known as the Blue Lagoon, famous among tourists. The entire Reykjanes peninsula is very tectonically active, and I when I first arrived I was struck first by the slight scent of sulphur in the air, and second by how barren the area is, with fresh basalt flows stretching in all directions. Nearer to Reykjavik, the Nesjavellir (120MW) and Hellisheidi (303MW) geothermal power plants sit on the flanks of Hengill volcano, which most recently erupted in 150 CE. 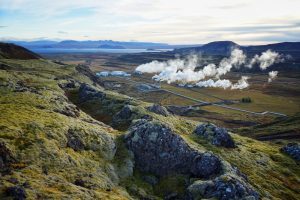 Three more power plants exist on the north side of the island. Krafla power plant (60MW) and nearby Bjarnaflag (3MW), are located just to the northeast of the famous Lake Myvatn, and are two of the older power plants on the island. Coincidentally, while Krafla was being constructed, nearby fissures opened up and spewed lava intermittently for about a decade, an event known as the Krafla Fires. The power plant still operates today, though heat and water levels in the production wells have decreased over time, as is inevitable with any geothermal system. While the geothermal power companies are under no regulatory obligation to sustain their fields for certain amounts of time, it is in their best interest to manage the reservoir sustainably.

Krafla is also home to the first Iceland Deep Drilling Project (IDDP-1) borehole, which was supposed to be drilled to a depth of 4-5km in an attempt to reach supercritical steam. The enthalpy of supercritical fluid is much higher than standard liquid and vapour dominated systems, potentially dwarfing previous power plant outputs. The project hit a major snag when the borehole unexpectedly intersected a small pocket of rhyolite magma at 2100m. A second attempt on a deviated hole hit a second pocket of magma. As you might expect, the drilling equipment was ruined by this, and the borehole was abandoned. All that remains is an inconspicuous wellhead – the well itself is now filled in with concrete. A second, more successful IDDP well has since been drilled on the Reykjanes Peninsula, reaching temperatures of 427C and pressures of 340 bars at a depth of 4659m! The well is still undergoing extensive testing to see better understand the resource, and explore the possibility of using it for electrical generation. 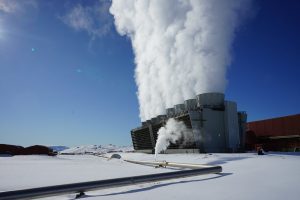 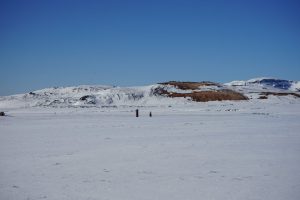 The final, and newest geothermal power plant is Theistareykir (90MW), which I didn’t have the opportunity to visit. Because geothermal power is so abundant and cheap Iceland actually attracts businesses from around the world who wish to save money on energy intensive steps in manufacturing, while simultaneously reducing their carbon footprint. There are a number of aluminum smelters in Iceland that take advantage of geothermal power, and Theistareykir will primarily power a silicon metal plant owned by a German company.

One aspect of geothermal energy that tends to deter investors is the initial uncertainty of how many megawatts the plant will be able to produce. Unlike hydro dams, where the production can modelled fairly accurately beforehand, the output of geothermal plants can’t really be determined until the plant is operating. Even then, there is uncertainty about how much water and heat can be extracted before it become unsustainable, and this can take several years of operation to determine. A balance must be struck between keeping investors happy in the short term, and keeping the geothermal field sustainable in the long term.

I spent the bulk of my time in Akureyri, which is Iceland’s second-largest town and unofficial capital of the north, situated on the western shores of Eyjafjordur. Unlike Reykjavik, Akureyri is a few hundred kilometers west of the axis of the spreading ridge. The surrounding region is characterized by deep fjords cut through Neogene (old, by Icelandic standards) layer-cake basalt flows. This area is not considered prospective for high temperature geothermal resources, but there is enough residual heat to provide district heating for Akureyri and surrounding towns (pop. ~20,000).

Much of the historical settlement of the area was based upon the locations of hot and warm springs, which were an important resource in the cold climate. Thermals waters were used in limited capacity for direct heating for much of the 20th century, but it wasn’t until the oil crisis of the 1970s that a major push was made towards a district-wide geothermal heating system. As Akureyri grew, this system became more and more stressed, and there was barely enough heat to keep the town warm in the winter, with electric boilers taking up the slack during the coldest periods. A major breakthrough was finally made in 1999 with the discovery of a high temperature anomaly in shallow groundwater wells at Hjalteyri, north of Akureyri. A production well was drilled, which now produces more than half of Akureyri’s heating needs, with plenty of capacity to spare. However, Akureyri continues to grow, so the search for new direct use geothermal resources continues. 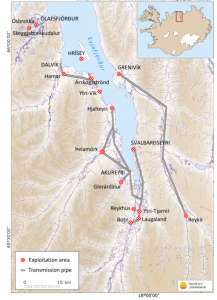 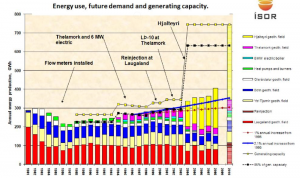 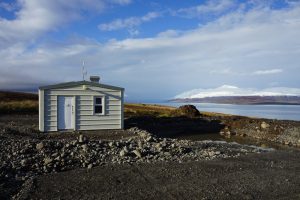 Image: One of two wellheads at the highly successful Hjalteyri field on the east shore of Eyjafjordur. Hot water is carried via buried pipeline to heat buildings in Akureyri, ~20km south. Such a small spatial footprint!

One aspect of ISOR’s research activities is baseline geological mapping. Given Iceland’s small size, I was surprised to learn that a significant portion of the country has not been mapped in high detail. In particular, the “old” basalt flows have not been given as much attention as the more exciting active volcanic areas. Having good maps is critical in understanding the reservoirs in which hot water circulates. During my visit I tagged along with ISOR staff member, Sigurveig, to do some mapping in her PhD study area, an old volcanic center. The weather in September in Iceland is hardly conducive to geological mapping, and we were almost blown off the mountain several times, but it was a great opportunity to get out and look at some volcanic rocks, which I don’t have a lot of experience with. 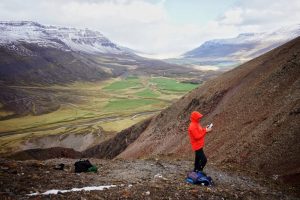 Image: Mapping Torfufell, a Neogene volcanic center, which is likely the source of much of the extensive basalt flows in the region.

The basalt itself is not a great reservoir, as most void space has been plugged with alteration minerals. Hot groundwater is instead hosted in fault and fracture systems that have high permeability. Who knew there would be something for a structural geologist to look at in Iceland!? The permeability of these fault zones is maintained by earthquake activity, which breaks through precipitated minerals, essentially “unclogging” the fault zones. Interestingly, recent investigations have indicated that the fault systems that these fluids are hosted in, are not on the same orientation as normal faults that would be expected in a rift system. Instead the fluids seems to be in north-south striking strike-slip faults, interpreted to have arisen from ongoing transform motion on the Tjornes Fracture Zone (TFZ), offshore to the north. The TFZ is an east-west striking, dextral fault zone that transfers extensional strain from the Iceland Rift System to the Kolbeinsey Ridge. The north-south striking fractures in Eyafjordur may be behaving according to a “bookshelf” faulting model, which would predict left-lateral slip on these fractures. On a brief field excursion I observed this for myself, and measured several roughly north-striking fractures with horizontal slickenlines. 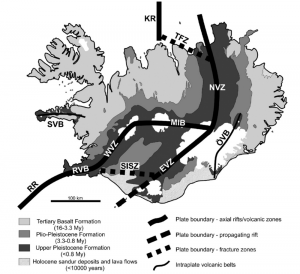 Image: Major crustal boundaries in Iceland. Note the Tjornes Fracture Zone (TFZ) offshore to the north of the north-south orientated Eyjafjordur. North-south oriented faults in Eyjafjordur may be the hosts of hydrothermal reservoirs. Source: Thordarson and Larsen (2010). 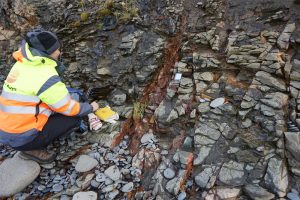 Some of these faults are observed at the surface, but they can also be mapped out at depth using a variety of well-logging techniques. A commonly used tool is an acoustic televiewer, which uses reflected sound waves to image the walls of boreholes. The acoustic waves are attenuated by fractured rock, and the fractures will appear as sinusoids of varying amplitude, depending on the angle at which the fracture intersects the borehole. The amplitude of the returned acoustic waves can also be used to estimate whether the fractures are open, or closed (clogged with mineral precipitate). When all the fracture data is amalgamated from a borehole, estimates of local stress directions can be obtained, which help determine which fracture orientations might be most permeable. 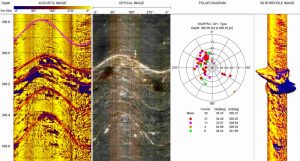 My visit to Iceland was fantastic and I learned a ton about geothermal energy from my hosts at ISOR. Perhaps one of my favourite parts of visiting Iceland was how geologically aware the public is. It’s no surprise really, since their lives are so directly influenced by so many geological factors. Not only does the earth provide heat and electricity, it presents serious hazards in the forms of earthquakes, volcanic eruptions, and glacial outburst floods. I was impressed by the number of geological museums, and the abundance of interpretative signage around the island. Every tourist stop (waterfalls, beaches, mountains, glaciers, geysers, etc) had detailed explanations of the geological phenomena at play, which made my drive to and from Akureyri from Reykjavik all the more interesting! I know I’ll be back soon… but now on to warmer temperatures and desert climates in the southwestern US! 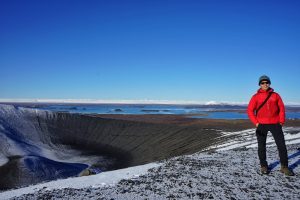