The first leg of my fellowship travels is now complete, and I write this enroute to Iceland, with the gorgeous Brooks Range, and Canadian Arctic Archipelago passing underneath. My visit to Alaska was jam-packed and I am glad to have the opportunity to write and reflect on all I have learned in Fairbanks.

When selecting destinations to visit for this fellowship, Alaska was an obvious choice. While geothermal energy does not represent a significant portion of the electricity production in the state, the resources they do have are, geologically, quite similar to those in Canada. I wanted to learn why Alaska has been successful in developing the resource, while we still lag behind in Canada. More specifically, I wondered if there were subtle geological differences that I was missing, or whether the answer was more to do with economics.

These three springs occur within what is known as the Central Alaska Hot Springs Belt (CAHSB), which is a diffuse zone of ~30 moderate-temperature springs that runs east to west across the state, from the Beaufort Sea to the Yukon border. Unlike the numerous springs in the Aleutians and Wrangells, which are likely heated by volcanic activity, the heat source of the CAHSB is more elusive. The springs occur in rough conjunction with a belt of Cretaceous-aged plutons, and while these magma bodies cooled long-ago, they tend to contain elevated levels of Uranium and Thorium, which may heat the groundwater via radioactive decay. Furthermore, these plutons seem to be affected by strike-slip faulting, which probably allows for the permeability that allows for groundwater to percolate to great depths. The fractured, radioactive plutons act like gigantic heat exchangers, slowly heating groundwater before it rises to the surface.

The Central Alaska Hot Springs Belt, and associated plutons. Chena and Manley are in the bottom right. (Kolker, 2008). The Cretaceous plutons often form the core of “domes”, which are basically just rounded hills. 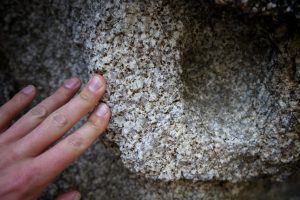 Chena Hot Springs (73 C)
One of the biggest geothermal success stories in Alaska is found at Chena Hot Springs, approximately 100km east of Fairbanks. It began as a typical hot spring resort, with tourists coming purely for the novelty of soaking in the naturally heated water. However in recent years it has been developed into a renewable energy showcase in its own right. In fact, it holds the distinction of being the world’s lowest-temperature electricity-producing geothermal resource. Water emanates from the spring at about 73 degC, well below boiling. It is then run through a heat exchanger in which its thermal energy is transferred to an organic compound known as R-134A (1,1,1,2-Tetrafluoroethane), a refrigerant which has a boiling point of -26.3 degC. The R-134A flashes to steam, causing a rise in pressure sufficient to turn a turbine and generate electricity. Cold creek water or cold winter air is used to cool the refrigerant before it is cycled back through the system. The refrigerant is contained in a closed loop, and never mixes with groundwater. This type of power plant is known as an Organic Rankine Cycle engine, and is quite commonly used in low to medium temperature geothermal resources, where the formation water itself is not hot enough to generate steam.

The “waste” water from the power plant is piped to a hot pool for tourists’ enjoyment, before being reinjected into the ground several hundred meters from the production (i.e., extraction) well. The reinjection stage is critical for the longevity of the geothermal resource. If not handled properly, the hot aquifer will lose heat over time.

In addition to electricity, the hot water is used to directly heat buildings at the resort. Especially in cold climates where heating constitutes a large portion of an electrical bill, direct heating makes economic sense. Rather than wasting energy by converting from thermal, to electrical, and back to thermal, it makes far more sense to use the heat from the water directly.

A major issue that Alaskans face is food security, due to their geographic isolation from the continental US. While farming in the north can be relatively successful due to the long summer days, the growing season is quite short.  At Chena Hot Springs, geothermal water is used to heat greenhouses year-round, allowing for a 12-month growing season! Hydroponic systems provide nutrients to plants, and efficient LEDs (powered by geothermal electricity) provide the necessary light. Several varieties of lettuce and tomatoes are grown and used in the resort kitchen, and I am told there is usually a surplus of produce. I made sure to sample the goods in the restaurant, and found the tomatoes to be especially delicious.

Another use of hot water at Chena is, counterintuitively, refrigeration. Using some serious thermodynamic trickery, the geothermal water is used to drive an absorption chiller (look it up – there are YouTube videos that can explain it better than me), in order to keep an ice sculpture museum cold throughout the summer months. While this use may seem like a bit of a novelty, the first thing that came to my mind was: ice rinks. There are certainly many of these in Canada that need to be kept cool year round! 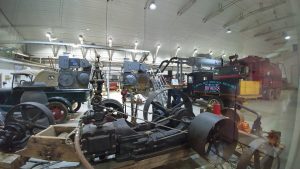 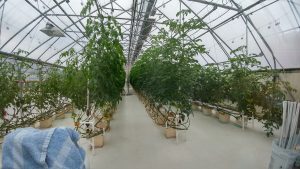 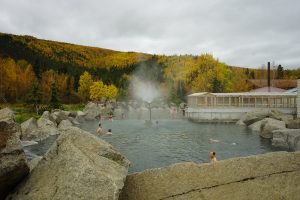 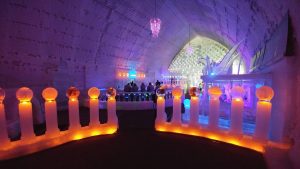 As the crow flies, Manley Hot Springs is quite close to Fairbanks, but by road, the route is circuitous, and takes about 4 hours to drive, and about 250km on gravel. Despite this isolation, Manley Hot Springs was actually home to the first ever Organic Rankine Engine used for a geothermal energy application. There is no longer any electrical power produced at Manley (ironically, it is back on diesel), however there is a farming operation that uses geothermal heat to extend the growing season for tomatoes, beans, eggplants, and a variety of other vegetables. The geothermal anomaly at Manley occurs over a broad area surrounding the town, punching a hole in the permafrost and allowing for more lush vegetation to grow locally. The naturally-occurring springs are used to heat a rustic bath-house/greenhouse, while the heat for the farm is extracted from a separate well several hundred meters away from the spring. I am not certain if any monitoring is being done to preserve the integrity of the geothermal reservoir. I spoke with the owner of the farm, and he said the largest problem he faced was finding enough people to help him pick all the produce! 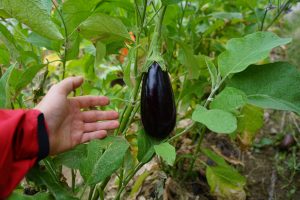 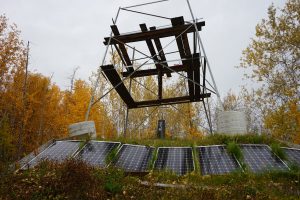 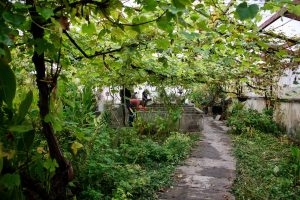 Manley bath house, with grapevines and other plants that would otherwise not survive at 65 degrees north.

Though I never had the chance to visit it, I spoke with several folks at the Alaska Center for Energy and Power, and the University of Alaska Fairbanks, about their work at Pilgrim Hot Springs, which is located north of Nome, on the Seward Peninsula in western Alaska. This site has seen a lot of recent exploration activity, with the intention of providing Nome with electricity, and possibly growing produce in a similar fashion to Chena and Manley. Unlike Chena and Manley, the source of heat for this hot spring may be recent volcanism. The geothermal reservoir occurs in the upper 300m of unconsolidated sediment, but water is thought to emanate from a deeper reservoir along an active fault that cuts through the bedrock at depth.

Innovative techniques in remote sensing and groundwater modelling have been applied here. Airborne Thermal Infra-Red (TIR) imaging was used to provide a more comprehensive map of where hot water is reaching the surface. In a setting like Pilgrim, where the spring outlets are diffuse, this was very useful in providing a more accurate estimate of heat flux than could be achieved with measurements on the ground. When assessing a geothermal resource, it is critical to understand just how much energy you have, and TIR is a relatively inexpensive way of doing this.

Information from TIR imagery can be combined with other parameters to produce models of the spring’s “plumbing systems” at depth. A common software package used for this application is COMSOL Multiphysics, which, given a set of boundary conditions, can model the transport of mass and heat underground. In the case of Pilgrim, researchers essentially asked: “given a regional heat flow, and the local groundwater flow regime, how do we end up with the spring distribution highlighted by the TIR imagery”. This combination of techniques makes for a very powerful first-pass model of the geothermal system, which can then be followed up with targeted geophysics and drilling. Efforts are underway to pinpoint the exact location of the fault from which the hot water is emanating, with the hope of tapping into a hotter reservoir. 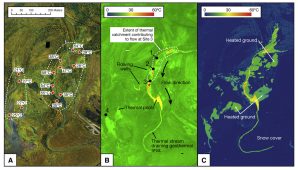 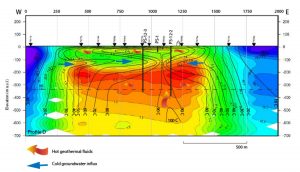 Subsurface model of the Pilgrim Hot Springs geothermal system. Note that the geothermal reservoir is only at 300m depth in unconsolidated sediment, though the hot water is believed to emanate from a fault at greater depth, near the 100C isotherm, but the exact location is still unknown. Miller et al., (2013).

Considering the modest success of these geothermal resources in Alaska, it is worth asking what is preventing further development of similar resources in Canada. I won’t go into great depth here, and I sure there is much more nuance than I can convey in a blog post, but here are some of my initial thoughts…

First: the geology. Generally, it seems quite similar: hot springs are roughly associated with fault systems that allow for deep circulation of meteoric water. In many cases the hot springs in Canada are also situated within Cretaceous plutons, though it has not yet been established whether or not these plutons have elevated radioactivity, as they do in Alaska. The springs in Alaska are on the high end of the temperature scale when compared to Canada, though there are some that have comparable outlet temperatures. The geothermal reservoirs that are being utilized in Alaska are all within several 100 meters of the surface, though there are thought to be hotter reservoirs at greater depths. In Canada, we tend to only discuss the use of deep reservoirs, several kilometres down, which are obviously much more expensive to tap into. Perhaps shallow reservoirs should be considered, however there is a valid concern that this would disrupt the natural flow of hot springs, which nobody wants. In Alaska, disturbing the springs seems to be less of a concern because they are so remote and fewer tourists and locals visit them.

Second: economic factors. I believe these may be more important controls on our respective levels of geothermal development. To start with, there are numerous communities in Alaska that are completely off-grid, and rely on diesel generators to provide power. This electricity comes at a premium, and is not subsidized by the government (as it is in Canada), so the residents of these communities have a strong incentive to push for alternative sources of power. The energy market itself is diverse, with numerous companies competing for business, unlike British Columbia, which has essentially one option: BC Hydro. Furthermore, most communities in BC are already connected to the power grid, which provides cheap electricity from hydro dams, so there isn’t an economic or environmental incentive to change things. Only remote, off-grid communities in Canada’s northern territories might have reason to push for geothermal energy development, but again, because their power is partially subsidized, the desire isn’t as strong as it is in Alaska. In BC, there may be more interest in direct use geothermal applications, e.g., heating a greenhouse to extend a growing season, or heating a house through the winter to offset electricity bills.

This is perhaps a discouraging note to end on, but on the bright side, I think that Alaska is proof that low-temperature geothermal developments can be successful. Perhaps in the face of growing population and electricity demands, the economics will change in western Canada, and the demand for geothermal energy will grow.

To brighten the mood, I’ll leave you with a picture of Denali, which I had the rare opportunity to see on a clear day, with fall colours in full force! 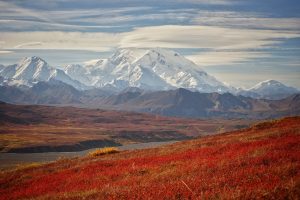