A Summer Spent in the Trenches

It has been a busy, busy summer! Since early May, I think I have spent a grand total of 4 weeks at home in Edmonton, and for the rest I’ve been occupied with TA’ing field school, attending a conference, visiting family, and conducting field work for my thesis. It has certainly been tiring, but also extremely engaging and fun, reaffirming my passion for field geology.

When I say the summer was spent in the “trenches”, I don’t mean those of warfare, nor the metaphorical trenches of hard work (though there was some of that), nor a paleoseismological trench excavated across an active fault, nor a tectonic trench at a plate boundary; I am referring to “morphogeological trenches”, a fancy name for several of the large valleys in British Columbia whose shape, and perhaps very existence, can be attributed to large fault zones that run along their floors. Because fault zones comprise of highly fractured rock, they tend to be more easily eroded by rivers and glaciers, and therefore promote the growth of large valleys. It is rare to find big faults on mountain tops! The unfortunate consequence for geologists, is that the faults themselves are often obscured by glacial and fluvial sediments that fill the valley bottoms, and direct observation of the faults is rare. 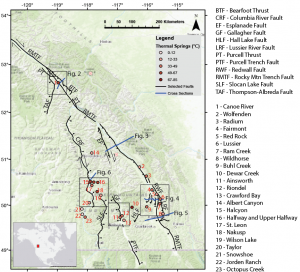 A map of major faults and hot springs in BC, stolen from a poster I made a few months ago.

The largest and most well-known of the trenches is the Southern Rocky Mountain Trench, which runs along the western flank of the Rocky Mountains, and contains the towns of Invermere, Golden, and Valemount. Beyond Prince George it becomes known as the Northern Rocky Mountain Trench, and beyond the Yukon border it is called the Tintina Trench. Together these trenches form an incredibly linear feature that stretches for thousands of kilometers from Montana to Alaska. The northern two segments of this trench system are thought to host upwards of 400 km of right-lateral strike-slip motion – that is, the west side has moved 400 km north relative to the east side. Strangely, this significant amount of displacement seems to disappear in the southern segment, which is instead thought to contain a normal fault, on which the west side has moved several kilometers downwards relative to the east.

Looking northwest in the Southern Rocky Mountain Trench near Valemount, BC.

Moving west, the next big trench is the Purcell Trench, which forms the boundary between the Purcell and Selkirk mountain ranges. It runs from northern Idaho up towards Rogers Pass where it merges with the Southern Rocky Mountain Trench, and contains Kootenay Lake, and the towns of Creston and Kaslo. Most of the literature on the Purcell Trench concerns the southernmost portion near the international border, where a normal fault is thought to have moved the east side down relative to the west. Further north, a mix of normal faults and thrust faults are believed to run along or near the valley floor. 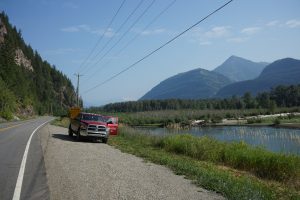 Looking north in the Purcell Trench near Kaslo, BC

West of the Purcell Trench is the Columbia River Valley, which runs from Castlegar up past Nakusp and Revelstoke before merging with the Southern Rocky Mountain Trench near BC Hydro’s Mica Dam site. While not officially recognized as a “trench” in literature, it seems to fit the bill: a large valley containing a large fault. In this case, the Columbia River Fault is thought to have moved the east side down several 10s of kilometers relative to the west. 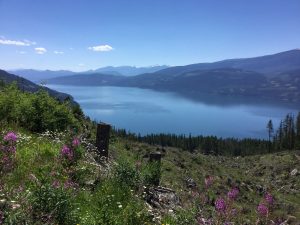 Looking southwest in the Columbia River Valley near Nakusp.

These trenches are interesting from a tectonic perspective because they represent major boundaries between different groups and types of rocks. The amount of displacement on the faults within them is debated, as are the kinematics (i.e., which way they moved). Again, because the faults themselves are rarely observed directly, geologists must rely on correlating geological units across the trenches in order to estimate the amount and direction of offset. Similarly, the age of the faults is only constrained indirectly by documenting which geologic units are offset by the fault, and which units lie undisturbed across it. In our case, the trenches are broadly thought to have been active as recently as the Eocene (56-34 million years ago), after the cessation of mountain building in the Jurassic and Cretaceous. 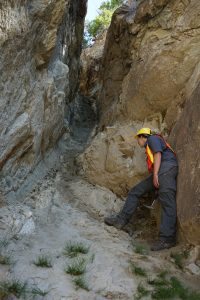 The trenches are also interesting from a geothermal energy perspective, because they appear to at least partially control the distribution of hot springs in British Columbia. The basic theory is that fault zones create highly permeable pathways that allow ground and surface water to circulate to great depths where it becomes heated before returning to the surface. Though the occurrence of hot springs doesn’t guarantee the viability of a geothermal energy resource, it can be a good place to start. Thus, the main focus of my thesis has been to investigate these large faults in greater detail than before, particularly in the vicinity of hot springs, but also in the trench segments where there are no hot springs, to determine what dictates the occurrence of hot springs in some places but not others.

Inside a large strike-slip fault with a wide gouge zone. Slickenlines are also faintly visible on the right hand side, above Noah’s head.

Data analysis will be a slow process over the coming months, especially as I begin my travels as part of the Hugh Morris Fellowship. Stay tuned for my next post, which should be from Alaska!