Not All Libraries Contain Books

Not all libraries contain books

Libraries are institutions that exist to collect maintain the records of society. Although little is known about the earliest libraries, they date back to 3000 BC from the Fertile Cresecent, a region in the present day Middle East. They initially held important instructions for building and agriculture but mostly records of commercial transactions. Over the years they evolved to accommodate a changing society to include major works in art, literature, comedies, and eventually teen drama. They become community centres of learning, discovery – and, importantly, scientific enquiry. Libraries have moved beyond collections of books, art, or relics, with a modern-day library hosting an entire collection of rocks.

Nowadays, rocks are primarily collected as core. Special drill rigs are designed to remove a cylinder of material as they penetrate deeper and deeper into the Earth – think of a hole-saw but bigger. These rigs are utilized by many industries in modern society, but mining or oil/gas companies use them to keep a record of the rocks from which they extract a needed commodity. The Alberta Energy Regulator’s Core Research Centre is such a library. The Core Research Centre in Calgary houses over 1.5 million boxes of drillcore, estimated to total 84 million meters – enough to wrap around the entire globe, twice. These rocks are accessible to companies and academics. 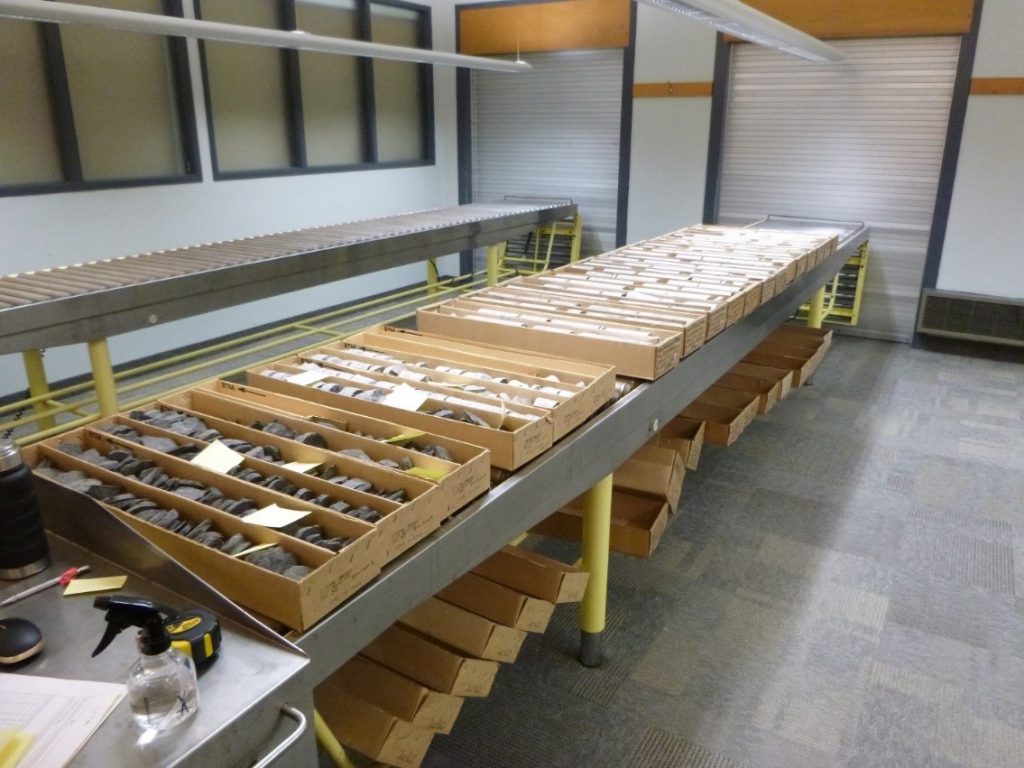 Figure 1. Photo of a core-rack holding boxes of drillcore at the Core Research Centre

Any mineral/rock collector can tell you some rocks and minerals look incredible. Some sparkle, glitter; some are iridescent or brightly coloured. Black shales, however, have none of these properties. Despite their lacklustre appearance, they are essential sources of critical metals. A future blog will include more information on shales that display magnificent imagery when viewed at a higher magnification than the human eye. However, shales are not the only rocks I looked at while visiting the Core Research Centre.

The other, more visible appealing, rock type is an evaporite. As the name suggests, evaporites form when salty water evaporates to the point where minerals precipitate. As water molecules transition from liquid water to gaseous vapour, the remaining water becomes more concentrated in other elements. Eventually, the other elements are at sufficient concentration to allow minerals to precipitate to form a solid substance. 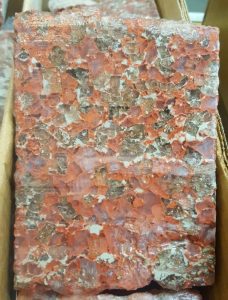 For example, ordinary seawater contains 3.5% salt by weight, the vast majority of which is halite (aka table salt).

The image to the right is halite – both clear and red crystals. Clear crystals are a more “pure” form of halite (sodium chloride, NaCl). The red colour is due to impurities in the halite crystal like potassium, magnesium or even algae. This sample is from a rock unit called the Prairie Evaporite found in eastern Alberta, about 200 km northeast of Edmonton at a depth of ~1 km; oh, it’s 400 million years old. The prairies are mostly grassland and lowlands, but 400 million years ago, it was submerged by an intracratonic seaway, which is a large body of water semi-connected to the open ocean. The western half of Yukon, the majority of British Columbia, southern two-thirds of Alberta, plus smaller sections of Saskatchewan, Montana and North Dakota were underwater with the open ocean (called the Panthalassic Ocean) towards the present-day west.

Evaporites are a possible source of lithium found in brines throughout Alberta and Saskatchewan. The hypothesis is that lithium would be incorporated into the evaporite minerals and that during some later dissolution event, the lithium is released into the fluid. Although there are several issues with the idea, it has not been thoroughly tested.

Not all rivers flow downhill

In some cases, these brines can be enriched in different metals, many of which are classified as critical for green technologies (e.g., Li, Pb, Zn). We might be more familiar with how water flows on the surface of the Earth, following topography, downhill until it eventually reaches a lake or ocean. Those rules do not apply underground. Underground, water can flow up, down, left, right, sideways, backwards or forwards; it may come to rest for millions of years, then flow somewhere else. It is still constrained by physics, but more variables are at play underground. Water can be incorporated into the rock through mineral precipitation (called bound water) or released from rocks through dehydration reactions. The chemistry of the water changes as it flows, and chemical interacts with rocks. Water can gain (or lose) elements, salinity, pH, density, and charge balance. These brines are collected in pools and allowed to evaporate to enrich elements for later extraction. With advances in technology, brines in Alberta and Saskatchewan are being evaluated for direct extraction of Li.. Given Li is a crucial component in batteries, it is expected to be in high demand as the rollout of green technologies continues, particularly the rise in electric vehicles. A better understanding of where the Li is from and the process that controls its partitioning into the brine will allow for better exploration of high-Li brines.