Rumours of gold in Africa had been known for some time, yet it was not until the latter part of the nineteenth century that gold was discovered in what would become the most prolific gold district in the world. Since the first significant discovery of gold in 1886, the Witwatersrand Basin, located in South Africa, is estimated to have produced 40 to 50% of the world’s gold supply. It is not surprising that the origin of such a significant amount of gold has attracted interest from both industry and academics.

Gold in the Witwatersrand Basin is hosted in a sedimentary rock called a conglomerate composed of clasts in a cement of quartz and/or calcite. The clasts can be anything greater than 2mm in diameter, but in the case of the Witwatersrand Basin are typically 1-4 centimetres pebbles. These rocks represent ancient riverbeds that once flowed on the surface of the Earth nearly 2.9 billion years ago. 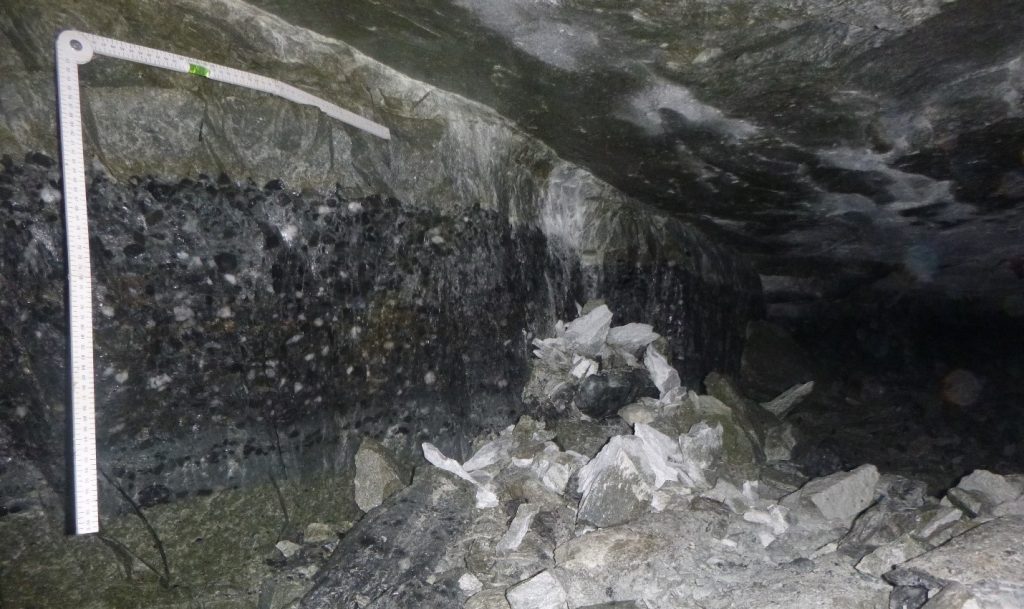 In addition to gold, these conglomerates contain two other essential features – the occurrence of uraninite and organic matter. Uraninite is a uranium oxide mineral, and the tonnage of uranium is sufficient for several mines to produce uranium as a commodity. The origin of organic matter is contentious, and there is little agreement in the academic community. Some people think these are remnant mats of algal (like the slime you sometimes find on submerged rocks in rivers or lakes), whereas others propose it is solidified product of crude oil. Both academic and industry geologists have tried to understand the origins of gold, uranium, and organic matter in the Witwatersrand Basin. Two models have stood the test of time. For the source of the gold, some authors propose the gold was introduced via a hot fluid (called a hydrothermal fluid), whereas others suggest the gold was introduced mechanical as gold nuggets that were subsequently remobilized by a hydrothermal fluid.

One of the methods used by geologists to understand the formation of mineral deposits is mineral dating. This is the method by which the age of a mineral (or rock) can be determined – typically using the ratio of elemental isotopes. An isotope is where you have the same element but a different mass due to different neutrons in the nuclei. A common dating method employed by geologists (and even archeologists) to date organic material is carbon dating. There are two common stable forms of carbon: carbon-12 and carbon-13 (98.93% and 1.1% abundance, respectively). Carbon-14, however, is not stable. In the upper atmosphere, the continuous bombardment of cosmic rays hits nitrogen atoms adding a neutron converting it to carbon-14. However, adding a neutron to carbon is not a long-term stable state, so it eventually decays back into nitrogen. During the life span of living organisms, they absorb carbon from the atmosphere and food sources in their environment – including carbon-14. When the organism dies, they stop assimilating carbon-14, but the radioactive decay continues. When scientists measure the amount of carbon-14 leftover provides an estimate as to how long the organism has been dead. However, due to how quickly carbon-14 decays, it is only valid for dating things from the last 50,000 years. To provide meaningful ages to the Witwatersrand mineral deposits, we need a mineral that decays over much longer periods.

Fortunately, the Witwatersrand conglomerates have abundant uraninite. Uranium has no stable isotopes, and uranium-238 decays via complex series into lead-206. Unfortunately, uraninite is a poor mineral to perform uranium-lead dating, mostly due to the crystal structure of uraninite. However, these shortcomings can be somewhat overcome by using multiple techniques investigating the uranium isotopes system. 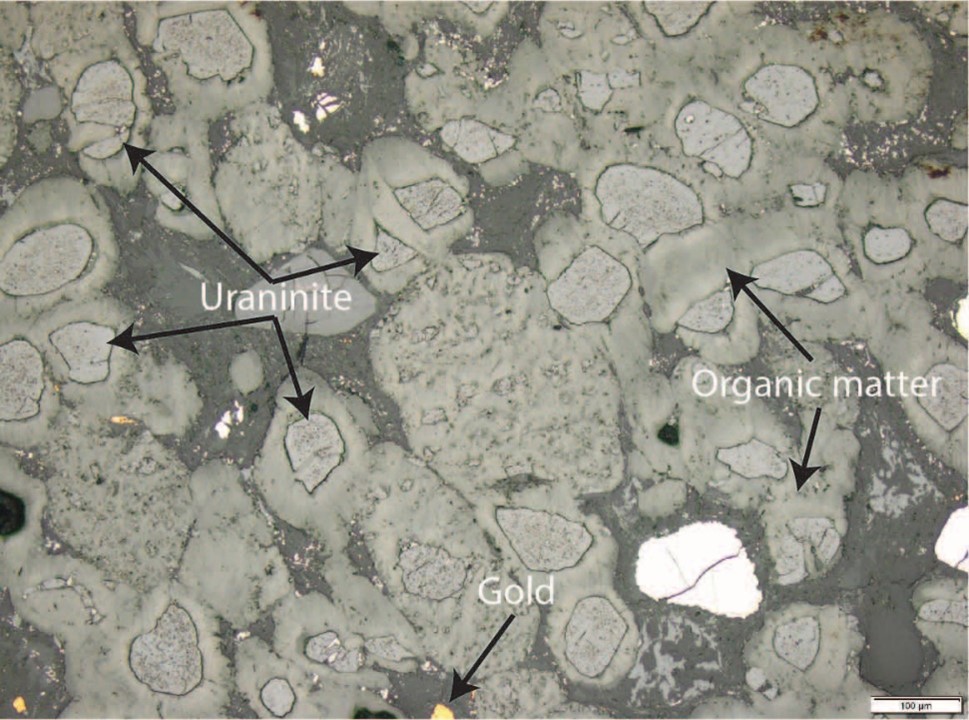 Scale in bottom right concern is “100 µm” which is 100 microns – for reference the thickness of human hair is approximately 70 microns.

The first method I am using in my research is an electron microprobe. A mineral sample is bombarded with electrons which cause the mineral to emit x-rays at wavelengths characteristic to the element in the mineral – and therefore, the mineral chemistry and be determined. This method does not discriminate between isotopes of a single element; consequently, we need to make assumptions about the isotopic ratios.

Right: image from the electron microprobe of the Witwatersrand Conglomerate with uraninites (white) and organic matter (black)

In the future, I plan on doing a second method called laser ablation inductively coupled plasma mass spectrometry (LA-ICPMS). This technique uses a laser to ablate (i.e., destroy) a small volume of sample that is turned into an ionized plasma which can be analyzed by element mass.

The data generated from these techniques can narrow the window in time the uraninites entered the Witwatersrand ore-forming system. Further examining the relationship between the uraninite grains and organic matter or gold, additional insight can be deduced about how the gold deposits formed. The significance of understanding the genesis of ore-forming systems to better explore future ore deposits.

Hopefully, as restrictions continue to ease, I’ll be able to continue my Hugh C Morris journey.