Critical Metals: A Race to a Sustainable Future

The global transition to renewable energy will see the demand for metal and mineral resources dramatically increase. Low-carbon technologies are significantly more mineral intensive compared to fossil fuels. Several metals have been dubbed “critical metals,” which is dependent on how widely used the metal is and how widely available. Some metals have higher usages in specific technologies (e.g. lithium in batteries). In contrast, other metals are used in lower quantities but in a wider variety of technologies (e.g., molybdenum is used in wind, geothermal, solar and hydro technologies).

To meet the future demand of critical metals, new ore deposits must be discovered. In recent years the cost of exploring for new deposits has exceeded the value of those discoveries. This is an unsustainable trend, and to reverse it requires new, cost-effective approaches to explore and extract mineral deposits.

In 2016 I joined the Hydrothermal Geochemistry Group at McGill University, lead by Anthony “Willy” Williams-Jones. The basis of my research is investigating the geochemical processes that create metal-rich shales. Shales are a fine-grained sedimentary rock that forms when sediment accumulates in low-energy environments (eg., deep oceans, Fig. 1). As the sediment accumulates, it becomes enriched in different metals (e.g., nickel, zinc, copper). The range of metal concentration observed in these types of rocks spans several orders of magnitude. The typical shale contains 60 parts per million (ppm), whereas other shales contain 50,000 ppm. The processes that control the metal endowment in a shale package are not fully understood. 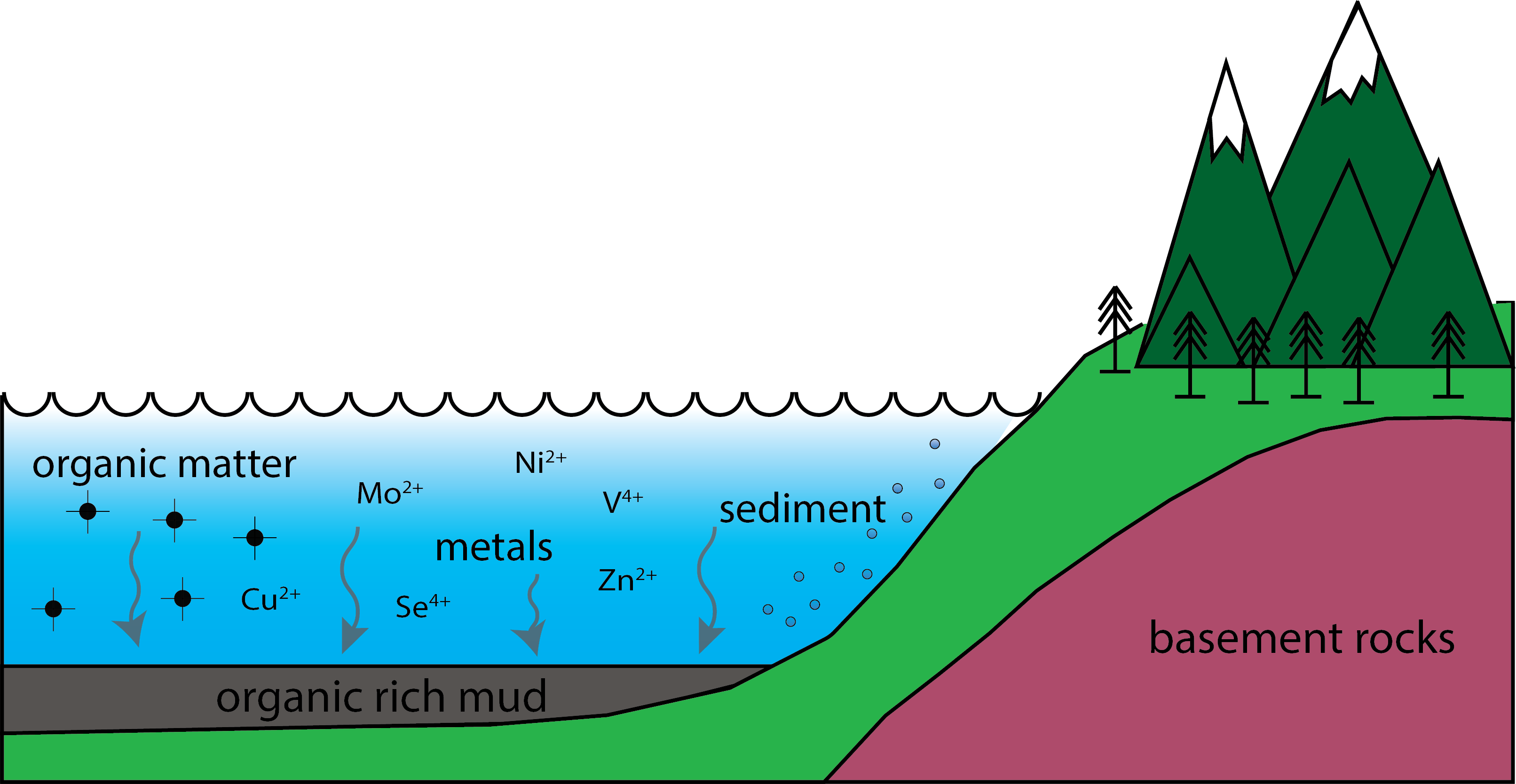 Figure 1. Beginnings of a black shale. In low energy environment organic matter and sediment accumulate on the bottom of an ocean. Metals are trapped in the accumulating sediment creating an organic, metal-rich mud.

So why study black shales?

Black shales are considered the source of metals for several different types of ore deposits, or form in similar environments to other kinds of ore deposits. As the sediment accumulates it undergoes lithification, whereby intense pressure over geologic time compacts the unconsolidated sediment into a black shale (Fig.2).

Figure 2. Lithification. Over millions of years the sediment, along with the organic matter and material washed in from the land gets compacted into an organic rich shale

During lithification, several geochemical reactions occur that can liberate these metals alongside a fluid. This fluid, either water or oil, can transport metals 100’s to 1000’s of kilometres. If the conditions are right, the metals in these fluids can be deposited, forming an ore deposit. In other settings, black shales host an ore deposit that is formed during deposition. Given the right tectonic environment and heat flow, a metal-bearing fluid can percolate through unconsolidated sediment and precipitate vast quantities of metals at or close to the seafloor.

These ore deposits, whether formed by a migrating fluid sourced from black shales or formed within a shale, will need to be found if we are to succeed to transition our energy grid off fossil fuels (Fig.3.)

In March 2020, I was thrilled to be selected as Hugh C. Morris Fellow. A few days later, most travelled was banned, McGill University closed, and Montreal became the epicentre for COVID-19 in Canada. This meant postponing much of the program I had designed. My Hugh C. Morris Fellowship is designed to extend my existing research into metal-rich shales to incorporate other shale packages and how these shales are associated with conventional and unconventional ore deposits. This involves collaborating with industry and government parties investigating mineral deposits in China, South Africa and Canada.

The second research project I have started is investigating the gold-uranium deposits in South Africa. The Witwatersrand Basin, a 300km long, 150km wide sedimentary basin, hosts the world’s largest known gold reserves and has produced close to one-third of all the gold that has ever been mined. The gold and uranium are concentrated in layers called conglomerates. A conglomerate is a sedimentary rock where gravel and pebbles size clasts (few mm to cms) are held together in a matrix of finer material. The gold and uranium are distributed through these conglomerates closely associated with organic matter. The origins of the gold, uranium and organic matter are controversial. One of the research projects, in collaboration with the University of Witwatersrand and Université du Québec à Montréal, is to age-date the uranium-minerals that have different relationships with the host rocks, gold and organic matter.

Hopefully, travel will be possible, and I can get going on the rest of my fellowship.