Another geological milestone, one of the Snowball Earth type-sections described by Paul Hoffman! Between 650 – 635 Ma, ice and glaciers covered most of our planet and even reached the equator. The evidence for this is contained within the Ghaub Formation, in the middle of the Neoproterozoic Otavi Group. It presents specific pre-,syn-, and post-glacial stratigraphic evidence from the Franstontein locality.  The Ghaub Formation is composed of massive carbonate diamictites. Tongues of these diamictites, which represent proglacial rainout and subglacial tillite are bounded by thinner, well bedded units of ice rafted debris, turbidities and debrites, and sorted facies. This debris is derived from glacial erosion of the falling stand wedge below.  In sequence stratigraphic terms, it is the low stand tract as sea level has fallen due to global Marinoan glaciation. This marks the beginning of the Ediacaran time period which saw the start of multicellular life as we know it,  when life got big!

Imagine our faces seeing huge boulders of stromatolitic reefs that were torn up and then deposited from the receding glaciers (world-renowned Ediacaran Palaeontologist Dr. Guy Narbonne for scale). This is important evidence of climate change during the earth’s evolution.

From a mineral exploration perspective, these kinds of rocks are of growing importance as similar (but older rocks from the Sturtian) are targets for sediment-hosted copper such as Ivanhoe’s Kamoa-Kakula discovery in the D.R.C.  #KFFellows 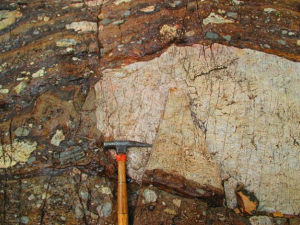 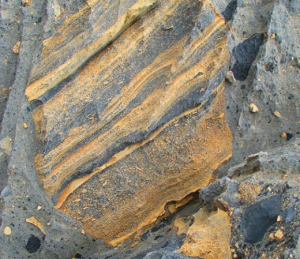 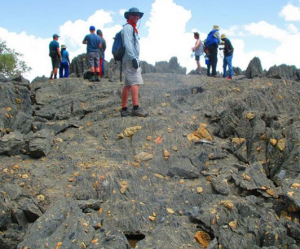 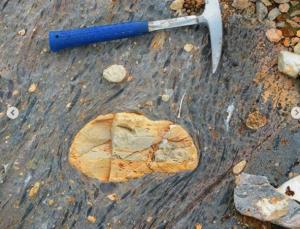